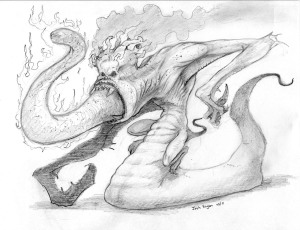 Been working on and off these last few weeks. Trying to get back in the swing of things creatively. This image is from a Dragon challenge that I just finished up today. Tried to come up with a totally unique take on the creature. Started off with a monkey, a bat, and a bull frog as my reference. The back legs are vestigial s the snake-like body is what it has evolved into using to move around with. The wings are useless now too as it’s now a ground-dwelling creature. The tongue swells and heats up until it becomes engulfed in flames which it uses to catch and pre-cook its prey with. The tubes on its head is where smoke escapes to cool its brain.