Time became a precious commodity around here as our little one arrived.  Many sleepless nights and priorities reorganized.  Absolutely amazing being a Dad!  Wouldn’t trade it for anything.  The challenging part is finding time (especially larger blocks of it) to work on your artwork.

First off I have a couple of ink sketches from my moleskine.  I wish I would have scanned the robot sketch first before moving on to the back of the page where I also used markers.  Bled through a bit, but still looks alright.

And these next 4 are my continuing concepts from watching Face Off.  And by the way, Ryan Straut over at http://faceoffsketches.blogspot.com is still hard at work on these.  Check them out!

1 – “Freaks of Nature” episode.  I chose the digging mutation.  I wanted him to be one with the dirt  basically.  Smooth to move through the ground easily like a worm.  And big claws to dig.  Nothing fancy, just practical.

2 – “Industrial Revolution” episode.  I chose the doctor as the profession my robot would perform.  The idea was that the performer’s arms would be hidden inside the torso and their fingers would control the gears/gauges on the chest.  The arms of the robot would be stationary.

3 – “Mad Science” episode.  I chose the leeches.  My idea was to have the performer’s arm inside the giant leech to control it.  There would be a fake stump where smaller leeches would dangle from.

4 – “What a Dahl” episode.  This challenge was based on the characters of Ronald Dahl, creator of Charlie and the Chocolate Factory.  I chose the Hornswaggler.  This was another idea of mine that incorporated a puppeteering aspect.  The performer would have their forearms inside the long horn/tusks and be able to manipulate them. 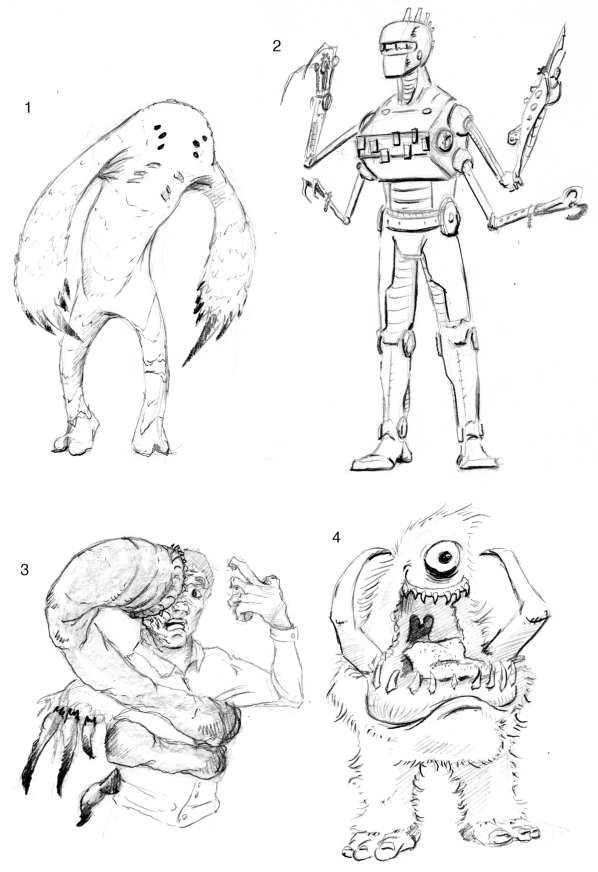 I have a lot more to show at some point when they get further along.  So, more to come!