I recently did a sculpture for the 2014 Pekin Days Art Show titled, “Little Buddy.”  The piece did pretty well.  I received first in the sculpting category and sold it as well.

That being said, I wanted to show the steps I took in creating the sculpture and a bit about the story behind it.

The sculpture started a few years ago.  I had a great idea for a character in an interesting pose.  Originally, the character was going to be a brutish fellow with a crow or some other type of bird on his forearm.  I created and posed the armature, covered him in a rough layer of super sculpey firm clay.  But that’s as far as I took him because that was the day my sister passed away.

So on my shelf this sculpture sat for a long long time.  Once in a while I would uncover the plastic covering it and I would look it over to see if inspiration struck.  But it never did enough for me to want to get back to it.

This year was a bit different.  Maybe it had been long enough.  Maybe it’s because I’m a new dad.  I’m not sure.  But I took out the sculpture, baked it, and sat down in front of it.

I felt that a troll would be a great direction to go in.  The figure was gorilla-like with big arms, small legs, big hands and feet, and a big head as well.  I had done a troll sculpture a few years back for the same show and it did well, so it was settled – the sculpture would now be a troll!  – and the little buddy ended up evolving into a squirrel.  I went ahead and baked the old under-sculpt and added to it: 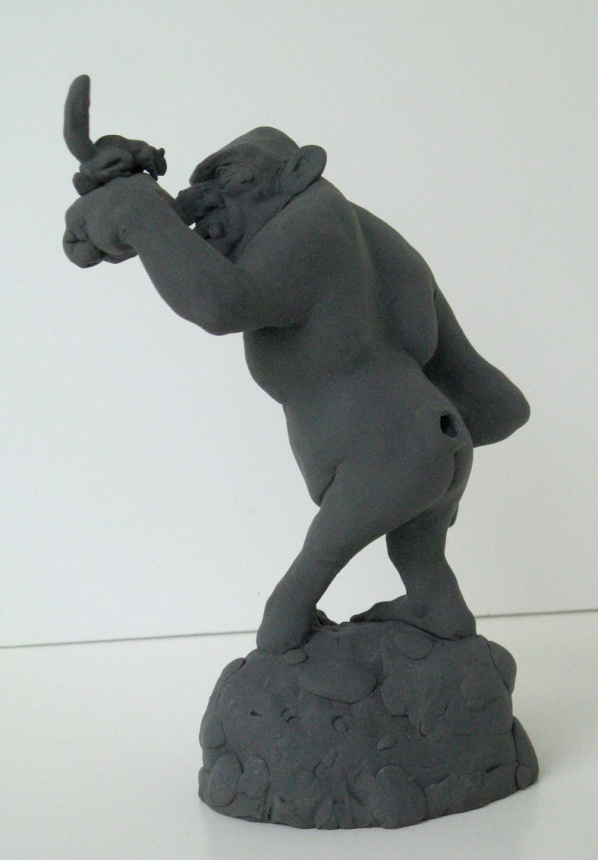 When the troll sculpt was done and baked solid, I moved onto the painting stage.  I didn’t want anything really detailed or bright.  I wanted it to be nice and simple with a little color peppered in there and there: 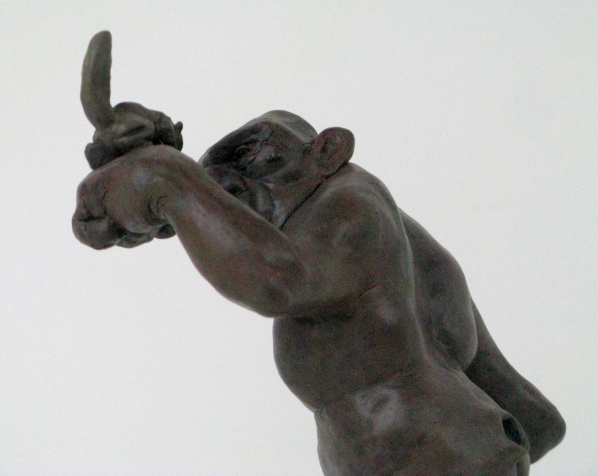 After painting, I took the tail that I had previously made and inserted it into the sculpture with some super glue.  The tail was created from a bit of rope and tied up with wax covered book-binding thread: 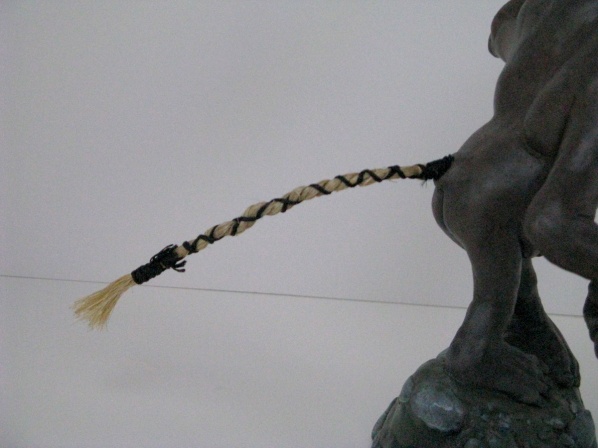 When that was all finished, it was onto the hair and shorts.  The hair is artificial hair that you can find anywhere.  And it was simply applied with super glue to the head and then cut and “styled.”  The shorts were a bit of a challenge as I had to attach them on to the sculpture.  Which meant sewing them onto him.  Not easy!  The shorts are made of tanned sheep skin and sewed up with the wax covered book binding thread I had used on the tail:

And there you have it!  The long journey of how “Little Buddy” came to be.

Many more pieces to show in the coming weeks.  Stay tuned!